Matt Porter is an accomplished NPC National Level Bodybuilding competitor, with various State Titles under his belt. He also is a contest prep coach for numerous physique competitors active inBodybuilding, Figure, Fitness, and Bikini competitions nationwide. He has been involved in the health and fitness industry for 10 years and has accumulated a wide array of knowledge regarding nutrition, supplementation and exercise.

If you have been weight lifting for a year or more and read magazines and the internet for information, you probably have come across the topic of Inflammation. You have certain people in the industry promoting anti-inflammation for fat loss and muscle growth and other industry experts advocating inflammation for protein synthesis and fat loss as well. When I mention inflammation I am referring to inflammation derived from nutrients in food such as fatty acids. High dose fish oil has been touted as a major player in regulating inflammation from a nutritional stand point, and arachidonic acid has been hyped up as a pro inflammatory muscle builder by supplement companies. How can two polar opposite fatty acids elicit the same results for building muscle and decreasing body fat? The simple answer is: they don’t. I have experimented first hand with high dose fish oil and olive oil and also high doses of arachidonic acid from red meat, egg yolks and various cheeses. I will share with you the effects that I got from both ends of the fatty acid spectrum when dieting for extreme fat loss.

After reading several articles from a popular trainer and author on a famous website that is revolved around testosterone and selling their own products, I took notice of his advice regarding extremely high dose fish oil. He was not just recommending 4-6 softgels a day, but up to 40 softgels a day of your standard 1000 mg product! After devising a plan of action about what products I was going to use and how I was going to orchestrate my diet, I would give this method a go. I planned on utilizing a low carbohydrate diet with carbohydrates only coming from green vegetable which bare minimal impact on blood sugar. I also chose liquid fish oil and olive oil for my only fat sources. The two oils were dosed at 4 tablespoons a day. Saturated fat from egg yolks and red meat were not present as I really wanted my omega 3 and omega 9 levels sky high.

I was ready to dive right in and become joint pain free and absolutely shredded from oxidizing fat from increased uncoupling proteins. I was already in very respectable condition prior to starting this cutting phase. I had my abs displaying with a pretty thin skin fold measurement and of course arms were lean and vascular, I would say I was 9-11% maximum in body fat. My mass gaining diet prior to starting was still low carbs, but high in red meat from burgers, bacon, cheese, and peanut butter. So the experiment began. I was adamant about not ingesting nuts or nut butters as I really felt I would achieve optimal results from suffering with just oils and keeping trace carbs to a minimum. After the first week I began to notice some cosmetic changes. I felt like my muscle bellies were flat and deflating slightly, I also noticed my pronounced vascularity was less prevalent. My joints felt nice, but I really felt softer and smaller. I just assumed this was an awkward period from transitioning into a dieting phase from a mass gaining phase, and after 3-4 weeks, things will swing my way. Week 3 arrived and a moment of reality hit me like a ton of bricks when a friend came into my work to talk to me. The very first thing he said when he saw me was “What happened to you? You look like shit?” “You looked bigger and leaner before you started your diet, what the hell is going on?” I immediately took offense and asked him what his problem was and he doesn’t know what he’s talking about, but after 5 minutes I knew he was absolutely right. I explained to him that I was experimenting with high dosages of essential fatty acids, namely omega-3 and omega-9 and that it is supposed to do all of these awesome things for fat-loss amongst other benefits. He quickly told me to ditch this protocol and do what I have always done because this obviously wasn’t meshing well with my body type. Like I mentioned earlier, I already felt the signs of this diet going south from the first week and knew I had to switch gears and get myself back on track.

“What happened to you? You look like shit?” (Quoted for truth)

I know that I am ectomorphic in nature and have always had a blazing metabolism. This made it very difficult building muscle and gaining weight. I knew from my past offseason that I respond extremely well to saturated fats. My new diet now consisted of lean red meat, whole eggs, whey isolate shakes with added egg yolks, light mozzarella cheese, and natural peanut butter. I would perform a carbohydrate refeed twice a week, on Thursday and Sunday for a 4 hour period.

After 1 week of switching from high dosages of fish oil and olive oil to an arachidonic acid rich diet, the changes to my physique were dramatic. My muscles began to swell and fill out, my vein protrusion was magnified, and my physique tightened up considerably. As the weeks flew by I got into better condition while maintaining muscular fullness even without the presence of carbohydrates. This solidified my thoughts regarding saturated fats being beneficial for ectomorphic hard gainers, and high fish oil being favorable for the huskier, endomorph body types.

From current literature it is widely accepted that ectomorphs have sufficient insulin sensitivity and higher metabolic rates. Endomorphs typically display insulin resistance issues and do very poorly with processing glucose, and also struggle with dropping body fat. Studies have demonstrated that saturated fat can increase insulin resistance by suppressing GLUT-4 production which reduces glucose transport significantly. However, for the ectomorph body type this shouldn’t pose any threat. Saturated fatty acids have also been shown to increase testosterone production and increase prostaglandin formation from a class of substances called eicosanoids. Saturated fat found in red meat, animal organs, and egg yolks contain high amounts of arachidonic acid, which ultimately gets converted into the prostaglandin PGF2a. Once converted to PGF2a, it can begin doing it’s magic. Pgf2a has been shown to inhibit adipogenesis through mitigating the activation of mitogen-activated protein kinase. Arachidonic acd is also is speculated to increase protein synthesis by the muscle being stretched from training and releasing prostaglandins PGF2a and PGE2. PGE2 is paramount in its role to induce satellite cell proliferation and fusion. This chain of events will increase the amount of nuclei in the cell which correlates to rapid muscle growth from mRNA production. These are just some of the attributes associated with consuming high amounts of inflammatory inducing fatty acids. As you can clearly see from my personal experience and the facts listed, that for the hard gainer, following a pro inflammatory based diet is optimal for muscle growth and lean mass retention. For the individuals who have naturally higher body fat levels and struggle to shed fat, I would say having higher dosages of omega-3 is advisable. Not excessive amounts like the article I read from that website, but at least 8-12 softgels a day. I personally believe all body types should keep carbohydrate intake low to moderate, but especially endomorphs need to be very meticulous with their carbohydrate consumption if they value a favorable body composition.

Schematic summary of the biosynthetic pathway for eicosanoids
derived from arachidonic acid. 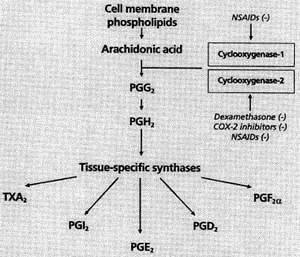 Please understand that I experimented with such a diet while keeping my insulin levels extremely low, due to being on a ketogenic type of diet. If consuming copious amounts of carbohydrates I would definitely not implement excessive amounts of saturated fats due to health implications that could arise. In retrospect, I realized that this type of nutrition plan worked great for me, but I now firmly believe in nutritional balance. I advise people to consume both types of fats in equal ratios combined with low carbohydrate allotment.

9. Zalin RJ, The role of hormones and prostanoids in the in vitro proliferation and differentiation of human myoblasts. Exp Cell Res. 1987 Oct;172(2):265-81.

Posts From the Past

Click to receive blog updates in a RSS reader